Financial Lessons Of The Great Recession 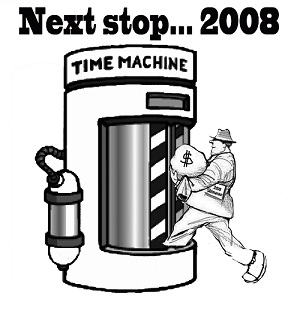 A friend of mine teaches at a university where the 2008 financial crisis came up during one of his recent class discussions.  He asked his students, “If you had one million dollars and a time machine, could you go back to 2008 and make a profit?”  The class replied that they couldn’t.  Not one student believed he or she could have turned a profit from the financial crisis.  He was troubled by that, so he asked his other classes the same question and no one indicated that they understood what happened well enough to do so.  Finally, he asked his colleagues, and even they were stumped.  A few of them had vague ideas or suggested they would just buy stock in Google or Amazon while it was low. Still, none had a firm enough grasp on the events of that autumn to confidently explain how they could have made money.

There are financial lessons to be learned throughout history. And you may or may not be surprised to know that there were people who made an enormous profit from the financial crisis. Here are a few of the lessons to take note of:

While a generation of would-be homeowners let the financial crisis scare them away from homeownership – a surprising number of Millennials say they’d prefer not to own a home, even if they had the money. The real lesson of the financial crisis is that it’s better to be in a home than not.  It’s scary to see people lose their homes; evictions are terrible and it’s easy to see why young people who saw the wave of Americans losing their largest investments, jobs and nest eggs would be spooked.  However, the people who had taken out loans that they could afford didn’t lose their homes.  That was incredibly important, because …

If you own your home, it’s a lot easier to lose money on paper.

During October 2008, Americans lost a combined one trillion dollars.  The thing about that trillion dollars is that it was everywhere we looked:  The federal government had a shortfall, so it passed it to the states, which passed it to the locals, so it cut back all government services. Look no further than spending on higher education and tuition costs.  People stopped retiring at the rate they had been, which was rough for Boomers, and it also meant that they weren’t opening up spots for Millennials in the workforce.  Even the divorce rate plummeted because people couldn’t afford to split up a household.

In the end, that trillion dollars became three trillion in government spending to start the economy back up. That is an insanely large amount of money. But, and this is the key, most individuals who kept their jobs and homes didn’t actually lose money.  In a lot of cases, they lost future income and they lost some value in their homes, but unless they cashed out of the stock market or sold their homes for less than they put in, they didn’t lose actual money; they lost money on paper.  It’s not like losing money on paper is fun, but in the worst financial crisis in nearly a century, owning a home was still the best way to keep safe.  If you lost some of the value of your home, but waited the recession out, you’re probably back to where you were before 2008, if not ahead.  That’s as safe as it gets.

Something that’s equally as secure is saving your dollars at a credit union like Box Elder Credit Union. We’re insured by the NCUA, so there’s very little risk and your money isn’t being invested in high-risk/high-reward propositions like mortgage-backed annuities, which brought down the economy in 2008.  If you’d like to know more about the safety of our savings options, click here.

One trillion dollars is a lot of money.

If you’d like to imagine that, think of a heist movie where the protagonist walks off with one million dollars in a duffel bag.  Now, imagine there are one million duffel bags, each with one million dollars in them.  Or, if you’d prefer, think of the Dallas Cowboys, who were valued at $1.7 billion in 2009, one of the few NFL franchises to gain value during the year after the financial crisis.  That same year, Cowboys Stadium, now known as AT&T Stadium, opened with a price tag of $1.2 billion.  As the most valuable NFL franchise playing in the most expensive stadium in the country, both could be had for just shy of $3 billion.  So, America lost as much money that month as it would take to purchase the entire NFL 10 times.

Sometimes, it takes a psycho.

One of the most striking things is that some of the people who made an enormous profit from the financial crisis all made big bets against the entire rest of the world.  They refused to accept common wisdom, they didn’t listen to their colleagues and investors who thought they were crazy, and they bet on an event which had never happened before and required an orchestrated failure at virtually every level of the American economy. The kind of person who can make a bet like that is a little bit crazy.  Sometimes, that’s what it takes.